Over the winter I was in the market for 3 new reels to pair up with my long-distance rods for the new year, over the last few years I’ve started to favor Daiwa for my reels, just personal preference. For this year I settled on the Daiwa Emblem 45 SCW… END_OF_DOCUMENT_TOKEN_TO_BE_REPLACED

No, I’m not talking about my age, although I am getting close to 30..I’m talking about the elusive 30lb+ carp. It seems that, depending on where you live, catching and landing a 30lb carp is a goal most of strive for, and for some of us, it takes years to make that goal a reality. 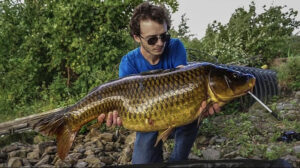 The image above was my first big carp at 26lbs 12oz caught in September of 2018. I was running with minimal gear at the time. I didn’t even have a proper carp net. But I’d been fishing this newly discovered swim for a few days and had a really good feeling about it. On day 3 one of my rods went off about an hour into the session. After a long fight I finally got the fish into the net and onto the mat. I was blown away. This was the biggest fish I’d ever seen at the time and it left me wanting more. This is where the hunt truly began. 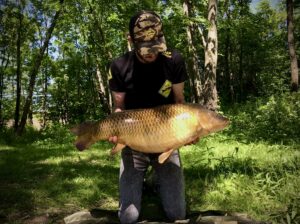 Fast forward to June 10th of this year (2021). I’m fishing one of my go-to local swims. This spot has always produced a lot of fish but nothing of any substantial size. I was lucky to get one in the low 20’s from here on occasion. Something was different about this day. The weather was perfect, it was quiet, and the carp were showing. I casted my middle rod to the far side of the bank, a risky move due to snags but I knew that’s where the fish were. Nearly 2 hours into the sessions my middle rod went screaming! When I picked it up I felt an incredible force on the end of my line. “This is definitely a big one” I said to myself as I attempted to steer it away from a downed tree close to the swim to no avail. This crafty carp buried itself deep in the tree branches, leaving me with a tight line and potentially no fish on the other end. Moments before this happened my right hand rod started ripping. I set the middle rod down with the drag loose and tended to the left hand rod. It was a small carp, maybe around 12 pounds, so I quickly let it go while watching for the other line to start moving..which it did! By some miracle this carp managed to free itself from the snag! Now it’s back on! The fish nearly got snagged again but managed to free itself a second time. After a really intense fight the fish was in the net. 29lbs 12oz. Exactly 3 pounds heavier than my previous PB, but not quite 30lbs. The hunt continues.. 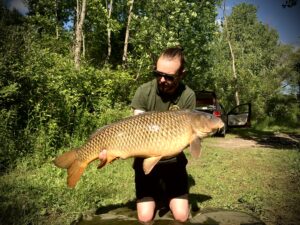 Fast forward again, but this time only one month to July 10th. I took a ride to another favorite local swim for a 24hr session. This spot is great for longer sessions because you can fish right out of the car. When I arrived I was on the phone with a friend so my initial setup was a bit sloppy being that I was distracted. I put a salty-pineapple flavored tiger nut topped with a single pop-up corn on each rig. I casted one to the left, about 10ft off the bank, and the other to the right also 10ft off the bank. No method mix or pack-bait, but I did throw a few handfuls of range pellets over each rig. The fishing here is always slow, I usually only average one fish per session and they never EVER bite in the middle of the afternoon. Well apparently today was different. I saw a few fish jump while sitting in the passenger seat of my car, but nothing too crazy. I wasn’t even sure if they were carp or not. I couldn’t have been here for more than 45 minutes when the left hand rod took off. I ran over and swiftly picked it up, the fight was on. Oh, and not to mention, I was at a bit of a disadvantage in this situation because I was using my new 8ft stalker rods instead of my usual 12ft rods…making this a much bigger challenge than usual. The fish ran to the right for what felt like forever, just pulling line like it was nobody’s business. For a moment I thought it was gonna spool me out. Eventually it slowed down and I was able to start carefully walking it back up the bank. It’s hard to say exactly how long it took to land it but it sure felt like a while. Now I’m standing in the water with my heart beating out of chest looking over the fish in total disbelief. “This might just be..” I thought to myself as I lifted the fish from the water and carried it over to the mat. This carp was long, and mint. Not so much as a missing scale from this one. Now ready to weigh the fish I lifted the scales and watched the dial wobble until it settled at 30lbs 8oz. Finally, I got my 30, and in my home state of New York no less. Upon release the fish swam away calmly while I sat on the bank still sweaty and shaking from the adrenaline rush. This is what we live for isn’t it? Whats next? 40? Only time will tell.

I’m using a handful of products from Forge Tackle during most of my sessions now and so far everything has greatly exceeded my expectations. The end tackle is of great quality and comes in eco-friendly packaging, my unhooking mat does a great job of keeping the fish safe while taking pictures, and the stink sack is a lifesaver if you’re riding in the car with a wet net and sling like I usually do. Click here to view the full range of products currently offered by Forge Tackle.