Combining comfort with functionality, the Lounger Chair features a pair of moulded clips on the rear frame allowing the chair to be set at three preset angles removing the need for awkward cams. With arms for added comfort, this chair offers the excellent head and back support required, especially if… END_OF_DOCUMENT_TOKEN_TO_BE_REPLACED

These past few years, the latest challenge I embarked upon, was the local tournament carp fishing scene. With thousands of hours fishing under my belt, dozens and dozens of of trophy carp banked, I was confident my success would translate into a tournament setting. How wrong this turned out to be!

In 2015 a local outfitter and tournament organizer, Tightline Outdoors, stepped up and added catch and release carp fishing events to their schedule. For Colorado this was a huge step forwards, for the promotion of carp fishing as a sport and for the fish as a positive species and resource in our waters. Having a long history in bass, walleye and ice events, the TLO tournaments differed from a typical carp tournament, being decided by the total length of common carp landed by each angler, rather than a big-4 or total weight approach. Anglers were able to fish in teams, helping to net fish, though the winner was still decided on an individual basis. The event would typically last for 6-8 hours fishing on a single day.

Their first event was held at a venue I was familiar with, Lake Arbor near Denver. I partnered up with my good friend and fishing partner, Ron Altman. We had fished the lake a few weeks before and I caught a couple of fish. Things were looking positive. However, as the tournament ended, I had blanked, my teammate Ron had caught a couple and lost a couple. He did not place high enough to finish in the $$$; those lost fish costing him dearly. My style of fishing had totally failed; the big fish waiting game.

The winners had banked 7+ fish, though only a few fish caught overall in the tournament pushed a specimen size. On the plus side, the teenage son of my good friend Daris, had won the event and the $1000 prize that went with it. Fishing with his dad, they got the job done!

This run of “luck” for me continued into future events, no matter where they were, whom I partnered with, I blanked. My partner blanked. The winners, more often than not, were using simple rigs and bait, usually sweetcorn on the hook or hair. The events were fast becoming a curse for me. I could catch fish at the venue, the days before and after the tournament, but during the actual event, my approach was not simply not working.

I learned over the next few years and after many more blanks, this style of tournament fishing was a numbers game. It was about how many fish you could catch and how fast. Size did matter but numbers mattered more. It was not my usual style specimen fishing. It seems obvious now, yet my mind was programmed to a different mode of fishing; long day sessions of 10-14 hrs, at known or well researched locations. There was also an element of randomness and luck involved. If you selected a tournament swim that held no fish, you were basically done, unless you were able to move. With the short duration of the event, the inability to chum due to Colorado fishing ordinances, you would have a hard time attracting any fish into the area especially if they weren’t already there or swimming through.

By the end of the 2016 tournament scene here in Colorado, I had fished 5 events and blanked in them all. A couple of my angling friends, some of whom I had even helped and offered advice too, had won a few of the tournaments; which did bring a big smile to my face. Though it may have been a little disappointing to always blank, the tournaments were still great to attend, an opportunity to meet and chat with all the other local and passionate carp anglers, share stories or tales.

The final event of that season was to be at Chatfield Reservoir, a location I know very well. This was to be a night tournament, starting in the early evening and finishing around midnight. My fishing partner James and I decided to get in some practice beforehand, fishing a few sessions just into the darkness. This was going to be the first tournament ever for James and I could sense he was excited to take part. We wanted to be prepared and do our best.

When the event started we were fortunate to get to one of the swims I was familiar with, very close to the event HQ. I setup to the left of the swim, James to the right. We knew the fish liked to hang out in the weeds about 40 yards out. As the evening progressed into darkness, James had a couple of runs and two fish landed. I had not even had a single beep off my alarms, even though we were using the same baits and were casting out about 15 yards apart. Around 9pm James had another monster run and the fish tore into the weeds. After a 20 minute battle we were certain the fish was never coming in, stuck fast. James did not give up or relent and 15 minutes later, after giving the fish a bit of line, he had a great fish landed and added to his score. Around 11pm, he had his 4th landed and in the cradle. Right before midnight, I finally had a blistering fast run, my first carp run in a tournament. My curse continued, the fish came off, i had blanked again.

The event was over. However, it was success for us, James had WON the event with his four fish tally. He was beyond happy and multiple cups of victory coffee were consumed. For many of the other anglers they had a rough night, loosing a lot of fish, to the weeds, snap-offs or landing them at the net.

The following season, 2017, there were only two tournaments. The first was to be another night event at Chatfield Reservoir. The second a morning and afternoon session at Lake Arbor. To prepare for the Chatfield tournament James and I fished several full overnight night sessions. We wanted to ensure our tackle and tactics were in place beforehand. We wanted more practice at landing carp during the hours of darkness. We knew we needed to improve our casting accuracy using landmarks against a back lit night sky.

The day of the event, we arrived early at the reservoir. A large storm had just finishing blowing through from the west, the skies ominous with dark clouds, the wind gusting. As the tournament started we were unable to secure one of the better swims near a point, instead we chose to make a long walk and drag our gear way down to the south end of the eastern shoreline. This was later to prove a wise decision as the point certainly produced the #s of fish, yet the anglers there split the many fish between them.

For this tournament I chose to change my approach, rather than my usual boilies, I fished with flavored maize and corn on the hair, soaked heavily in pineapple or tutti frutti flavoring; i also went with a size #8 hook, rather than the #6s I would typically be using. I had an early run, just after darkness. It was a tough battle and netting the fish proved a challenge for James in the waves, but he got her in safely. My first fish landed in a tournament. I was happy beyond belief and celebrated with a victory coffee. 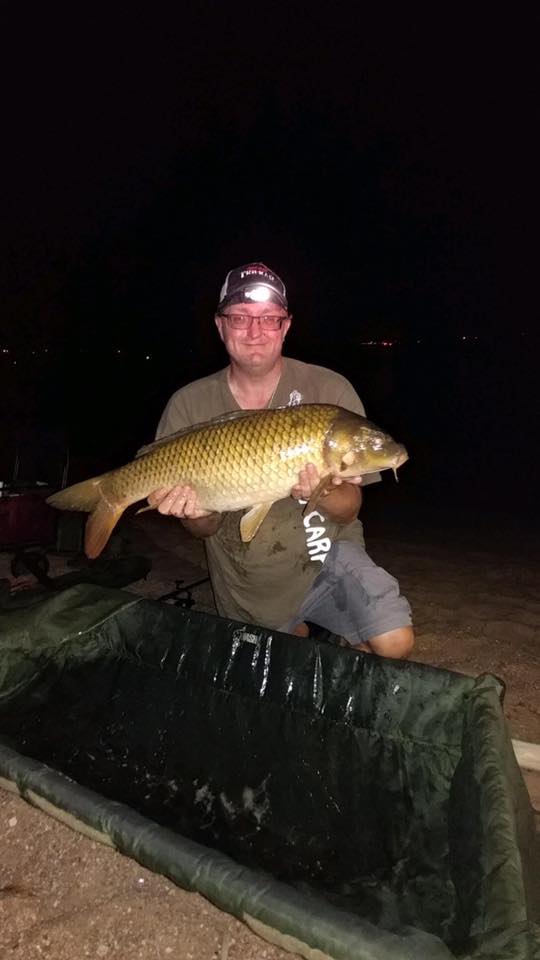 As the hours moved on I could see just up the bank some friends of mine catch their first fish apiece. As the night continued they had a couple more runs but unfortunately some of those fish came off or were lost right at the net. Finally, with an hour or so remaining, I had a second run, another single tone screamer. As with the first fish, it put up a great battle and this time James waded out into the water, shoes, trousers soaked to the waist, getting the fish in the net regardless of the waves crashing in. James knew how important that fish was to me and wasn’t about to let getting soaked allow the fish to come off at the net. 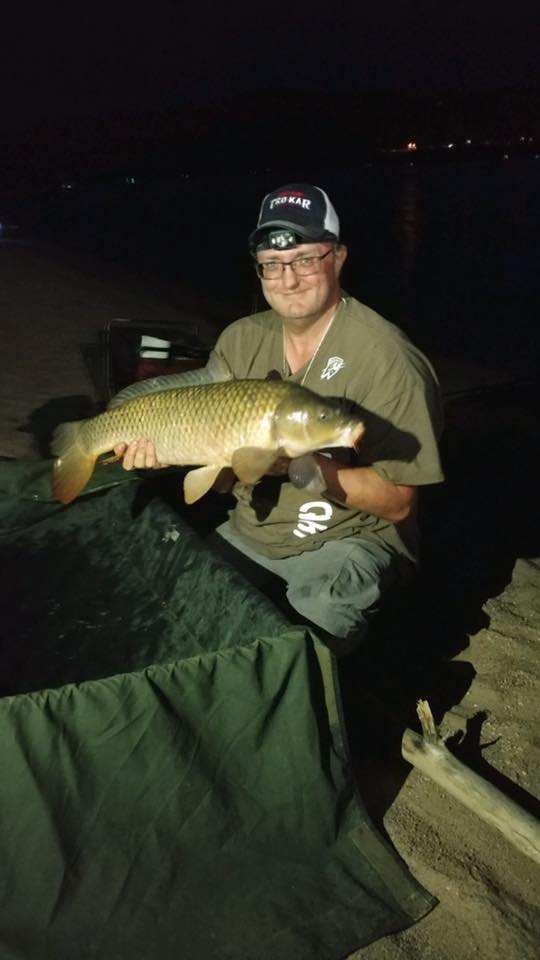 Hearing reports of the other catches around the lake, I knew I was close to first place by length, my two fish being just over and under the 30” mark. These were above average fish for Chatfield, the average being around 25-28″. As the final horn blew and the event came to an end, we made our way back to the event HQ. I was aware several anglers had also landed 2 carp each, it was going to come down to the inches, literally.

The final tally was in, I had WON my first tournament. VICTORY! 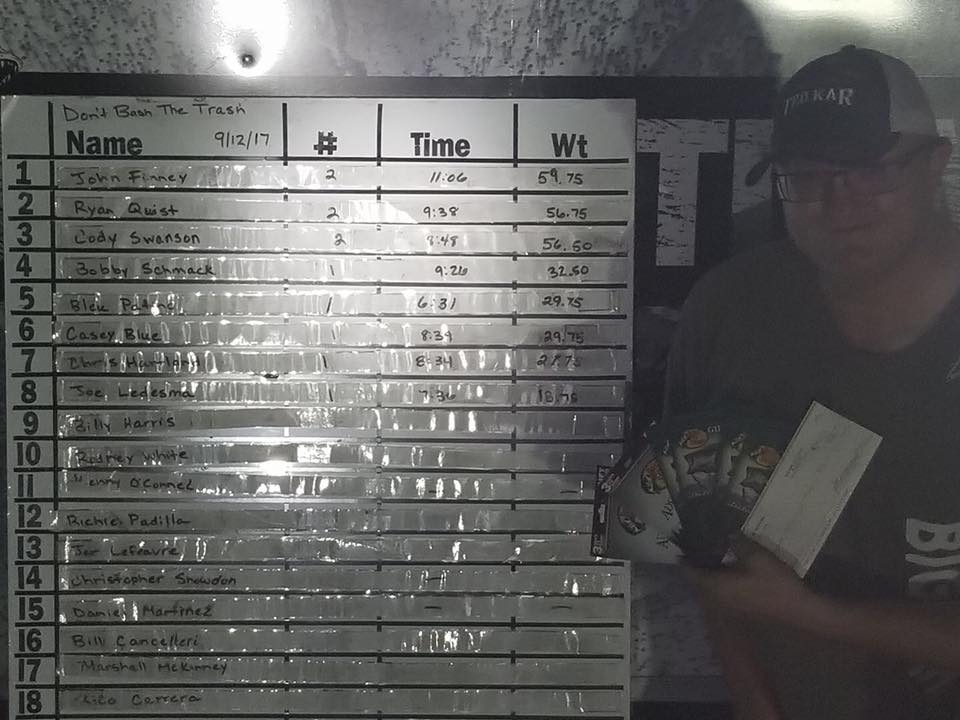 The margin, just 3 inches! The anglers in 2nd and 3rd place, each had lost a fish, towards the end of the event. If they had landed that 3rd fish, they would have won. Ultimately it came down to landing the fish, through the waves, around the snags and into the net. There is always be an element of luck involved in tournament fishing. However, over the years, the same familiar angler names were placing more than once in the prizes. Their approach, skill and tactics, overall leading to consistent success. This event was no different.

The final event of the year, at Lake Arbor, I blanked again. My friend Bleu won, catching the winning couple of fish with but an hour remaining in the tournament.

For me, those years of effort, learning, blanking, figuring out the tactics, making adjustments, getting in the practice on the bankside, especially in the darkness, had finally paid off. I still do not consider myself a tournament angler. I am a recreational fisherman. I enjoy the time on the bank with my friends as much as catching a specimen fish. However, pushing myself to take part in the events has opened my eyes to a whole new style of fishing and approach.

Tournament fishing has given me the opportunity to meet dozens of passionate carp anglers, to participate personally with the community of those who consider carp truly a great sports fish species and are prepared to do battle over them with rod and reel. It also brought me much laughter and playful jests and jibes, especially when I fished each event and returned at the end with a dry net and empty coffee mug.

So what have I leaned over the past 3 tournament seasons?

As I write this article I am already preparing for the next TLO Tournament here in Colorado this weekend. I am looking forwards to seeing a lot of familiar faces, catching up with old friends and perhaps making some new ones.

The victory coffee mug will be with me as always!

So, when you see the details of your next local carp tournament posted, and you think to yourself, “tournaments, it’s not for me”, perhaps reconsider,